My supervisors, Katie and Mitchell, were trained in the European style of conservation. European and American style conservation differ on some key elements. Members of the AIC (Mitchell and I both are members) will occasionally get literature in the mail about the latest technologies being used to analyze historic antiquities. In contrast, European conservation is rich in learning traditional skills from many generations, usually in an apprenticed style of learning.   For example, Mitchell, from a very young age learned upholstery and leather reparation techniques from apprentice-trained journeymen craftsman. MPF Conservation’s studio is very different from Robert Krueger’s lab.  While Robert had a perfectly air-controlled room with cabinets of various chemicals and beakers, the MPFC’s studio is built more like a workshop with a section of the room for leather, another section for woodworking, and another section for textile work that all combines in the middle where Mitchell’s working on restoring a Louis XVI sofa.  By their nature, various studios are different: furniture conservation, especially upholstery conservation, would be impossible in a air-controlled room because the cotton, feathers, and hair used are by their nature “messy.”  However, Kate’s finish studio is in another room and the HVAC system has been modified to be a clean room.

Over lunch, I had a discussion with Katie and Mitchell which lead to a brief speculation on WHY one might choose to conserve an art piece. The answer should be easy, right? It’s to keep artwork around for future generations to enjoy. Well, it’s not always that simple.

An American conservator may have no problem taking out the original springs and stuffing in a chair cushion and filling it with ethafoam (Polyethylene foam) as long as they preserve the frame and possibly the showcover if original, but a European craftsman conservator may be appalled at that and protest that it’s best to keep as much of the original as possible. So, this begs the question. Why are you conserving said chair? Are you trying to make it presentable for a museum, or are you restoring it to use?

Mitchell had an interesting comment to say about upholstery conservation. He stated before that some members of the AIC don’t view the preservation of upholstery as important because their understanding was that the upholstery has been removed anyway. In his experience, however, he found that upholsterers would simply add to the stuffing that’s inside, causing a time line to be viewed and analyzed.

I would challenge that the business of conservation is to preserve cultural history, which includes form and content, depending upon the object. The conservator has to know the true history of the object, and either alone or with the assistance of the owner/curator decide what is culturally significant.  MPFC believes the innards of upholstered objects are often an important part of their cultural significance.

Kate also went into extensive detail about the business end of running a conservation studio. She used her past experience as an architect to form the proper methods of billing and legal ramifications that come with owning such a business. She told me what to put into the fee when billing a client; the obvious time and materials and not-so-obvious consideration for when tools wear down and paints run out and things like that.

My goal for this internship WAS to restore a garage-sale Imperial Monterey-style chair for Kate’s personal collection using conservation techniques. She recently informed me that due to task conflicts, I may not end up finishing this project.  Katie wants to use it everyday. And boy, it’s in bad shape. Kate and I walked through how to conduct initial client interviews (she was the client) and assess the pieces toward an estimate.  Both Kate and Mitchell also believe it is important to do enough research so that you understand styles and/or the history of the items you conserve.

Before I began treating it, I had to fully document the chair. This involved extensive photo documentation. I was instructed to photograph the chair from multiple angles.

Then I had to take some close-up detailed shots. The extensive photography is important for multiple reasons. There’s the obvious “before and after” shots necessary, but it’s important to note any damages before any treatments are done because if there’s any unforeseen changes during the treatment, the photographs can be referenced to see if such damages were always there, or if that was a new development.

Now from some history. True Monterey, or Mason Monterey, was started by Frank Mason, a set designer in Hollywood for the old Western movies. The idea was that he was supposed to make furniture for the movies that would have been used in the old Frontier days. While he was working on this, he met Juan Duran Tinoco, AKA Juan Intenoche, was a cartoonist who was born in Mexico, but grew up in Los Angeles. Frank hired Tinoco  to create the painted look of the furniture and called it “Monterey.”  The style grew in popularity and movie stars helped increase its popularity!

Other furniture companies started to pick up on Mason’s success and started their own lines of Monterey furniture as well.   Coronado, Del Rey, and Imperial were among the companies that followed Mason’s trend.  Sometimes, the same artists would work on both styles.

The chair I’m working on is Imperial Monterey .   The Imperial furniture line shown above and the chair I am working on was made in Los Angeles, California. The line was typically made of mahogany and characterized by heavy iron strapping, with a painted finish similar to Old Wood in the Mason line, using rottenstone as a grain filler.

During the assessment, when I turned it over, there was orange crusting at the bottom, somebody stuck chewing gum under the seat, and the leather strapping was suffering from leather rot, which leaves reddish residue and powders the leather.  This leather condition is unusable, and even had straps missing.  need to completely replace it.  I was scared to pack it around so much.

My next step is to excavate the chair, or “turn it into a pile of sticks” which is not far from the truth, in that I have to remove all leather, and then disassemble the chair in order to repair compromised joints in order to stabilize the frame. 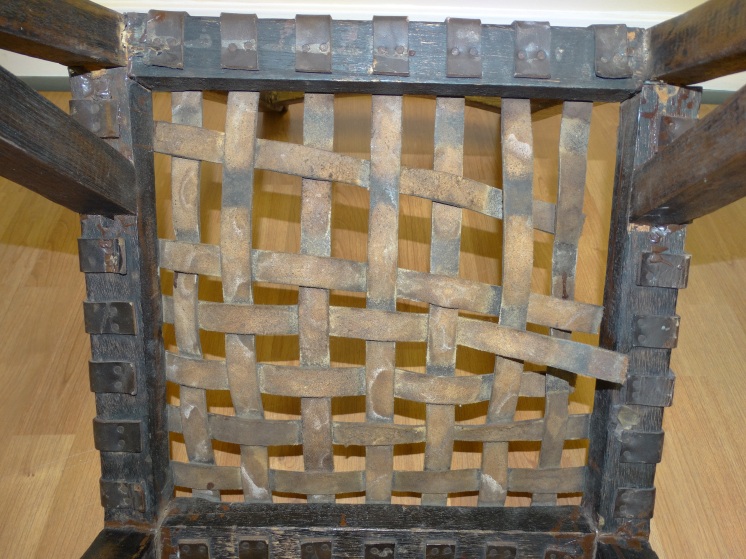 There’s been several areas with epoxy from past “repairs,” and I came to find out later that there were a bunch of extra nails hammered into the chair that are interfering with a smooth restoration process that need replaced.  I spent the first day of my internship removing the leather, but not before marking the areas where the new leather will have to be placed.

Remember when I said photography was important? Because, the second week, I had to take the entire chair apart turn it into rubble. While I did this, I took numerous shots of the process. This proves to a potentially skeptical client that you took the time to take the chair apart and diagnose everything about it. More will be elaborated on next post…