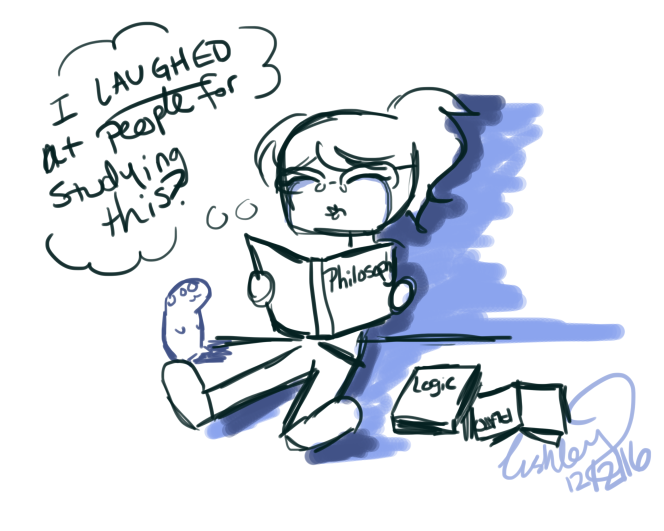 I was sitting in the computer lab at school looking at my transcript to marvel at how much closer I was to graduation. Turns out, it was lucky that I did because I thought I was only five credits away. In actuality, I was NINE away, and FIVE of them needed to be in art history. :O Oops.

I needed to take another online class because otherwise, I wasn’t going to have time to work, internships, and work and take classes at the art school.

I knew I needed to take organic chemistry for the eventual MA in art conservation I planned to take… oh darn, only O. Chem II was being offered this term…

My brain then wondered off about this past election, and how there seemed to be so much hatred and bigotry that rose out of it, particularly how everyone wanted to scream their opinions fueled by pure rage and anyone who disagreed with them were just selfish, lazy, entitled, evil (list goes on)… a lot of people were clearly ignoring facts, only hearing what they wanted to, and based everything they said and believed on emotion rather than log-

With glee, I found an online Philosophy: Formal Logic course and signed right up, thanking my lucky stars that it wasn’t filled up (though, I was a little surprised that it wasn’t considering how late it’s been since registration started).

Since I knew this wasn’t going to be an easy class for my brain (not because I’m dumb, but my brain is better at art rather than anything math-related), I ordered the textbook right away and started to read and study so that I wouldn’t be going in for Winter term completely lost.

I don’t exactly remember how I originally thought this, but for a long time, I had this idea in my head that I should stay as far away from philosophy as I possibly could because anyone who goes into philosophy is an arrogant, self-righteous jerk who get’s punished for their hubris by working as a barista their whole lives .

For all you people going into philosophy, I am truly sorry for thinking this, and I hope you can forgive this art history major’s closed-mindedness. T_T

Now, while a philosophy major may not be the most lucrative of degrees, and as much as I think it wouldn’t exactly be worth going into debt over, I really wish that philosophy was given much more credit than it is now.

One of the first things that I think helped change judgement on philosophy was that it came up in a conversation about how the types of people who do well in the video game development industry are people who’ve studied computer science, math, or philosophy.

Yes, because at the very heart of philosophy, the very foundation, is classical logic.

I never really thought of logic as being in the same category as philosophy. I always thought it was more of a math thing, and philosophy was just a bunch ideas of pretentious ideologies that may or may not have any basis in reality. As much as I want to blame the education system for the few times it did come up  and was executed poorly, I know that if I had any sense, and just took two seconds to learn ANYTHING about philosophy, I probably would have fell in love with it.

So, here’s a little bit of background about me: I’m generally an emotional creature. It’s very difficult for me to think logically unless I’m in peak physical condition. I’m sure many of you guys feel this way too.

Thankfully, I was raised by someone and even have a younger sibling that just think logically just naturally. I really admire those of you who can.

Some of you can take anything, for example, a post on the internet, and have the rational capacity to not only fact-check it, but think of so many different ways why this post either makes sense or doesn’t make sense just by looking at inconsistencies and patterns. You don’t question it because you don’t want to believe it, you question it because you want to get to the absolute truth.

I’m really grateful to have had a mother who valued thinking over emoting, because I think my personality would have made it very difficult for me to function otherwise. As someone who’s emotional, I do find myself getting anxious, upset, and paranoid over stupid things outside my control. It was really nice to be raised by someone who encouraged me to just take a step back and think:

Is there anything I can do about this?

If yes, then do it. If no, then there’s no point in worrying about it: the reason why you’re anxious is because you’re trying to avoid worrying about something you SHOULD worry about, or you’re just sleepy/hungry.

This kind of thinking is the very basis of Stoicism. It’s a philosophy that doesn’t have to do with how you feel about how the world should work, but what you can (or can’t) do personally about your situations, and it’s very much grounded in logic.

So, my friendlies, this is why I’m excited to be taking logic next term.

Logic isn’t simply just another fact you have to learn to be “educated,” but it’s a ground basis of how to think rather than just what to think. This is skill that I think, especially with everything going on right now, that everybody should learn.

I’m really enjoying my textbook so far too: Classical Logic and its Rabbit Holes by Nelson P. Lande. The writing style is sophisticated, but humorous like something a mad genius would write, and it even has a flip-book in the corners of the pages!

3 thoughts on “I Feel Bad for Philosophy Majors”