Start typing and press
Enter to search
Skip to content

Sorry for not posting anything. My laptop was out of battery and I’ve been procrastinating getting an adapter. I’m currently in this limbo between too tired to be out and about, but I’m too wired to take a nap (which is a good thing. I took a nap yesterday evening which went on too long that caused me to miss the evening mass (church service), and completely screwed up my sleep schedule… again). So… I’m currently in my apartment just relaxing and reaching out to you all.

My boyfriend drove me to the airport. I’m really happy he did, but, as you can guess, it was pretty emotional for both us. He’s been very supportive of me going on this trip, but it was still pretty sad. I do love living in the future though. He’s been in constant contact via phone, and he’s going to be visiting for Christmas. So, I’ll be seeing him in three months instead of eight.

I will say this though. Going from the Westcoast to the East to Europe was absolutely brutal! I did see Guardians of the Galaxy 2 though. That was a pretty fun movie.

I met up with the rest of my classmates in New York. Most of them were undergraduates, but the ones I hung out with during the flight were pretty cool. They were studying animation, and given what I could pick up from their personalities and conversations, they sounded like very hard workers too. Definitely not here just to goof off and vacation I can tell you that much.

The next step was making a stop in Germany to transfer flights. So, now I have a stamp in my passport from Germany. Yay! Our flights were delayed an hour, which kind of sucked, but oh well.

Then… we got to Florence… I waited for my luggage with a couple other classmates, the one I talked to the most, Liz, was an adorable sprightly graduate student with a pixie cut. Our luggage never showed up. So we had to file a claim and as far as I know, it still hasn’t shown up yet. Thankfully, I always pack for a flight with the assumption that this will happen, so I had a week’s worth of clothes in my carry-on.

Turns out Liz and I were going to be roommates! Yay!

It’s a very cute apartment. It’s also practically right next to the Duomo, so that’s nice.

And here’s some pictures of the apartment: 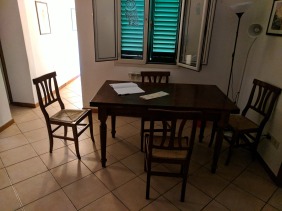 And here’s some additional photos I took: 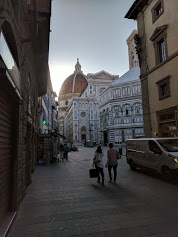 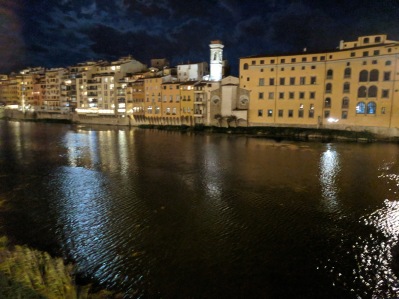 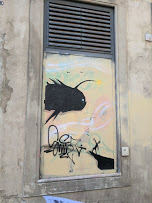 My roommates are awesome. There’s supposed to be five of us, but I know one had trouble with her visa and I’m unsure where the other one is. For now it’s just me, Liz, and Robyn. Robyn has traveled quite a bit and has lots of interesting stories. She also knows enough Italian to get around. Liz and I share a very similar philosophy when it comes to art, and this idea that there’s no reason art shouldn’t be happy and beautiful. On top of that, we’re all getting along great and we’re either clean people, or messy but trying hard to be clean, and we all like to cook!. They’re both vegetarians. Which means A) More meat for me and B) Meat is expensive anyway, so maybe it wouldn’t be in our best interest to buy it all the time.

Honestly, after all that getting mentally ready for the “horrible roommate” experience that I was kind of preparing myself for pre departure, I don’t think I could possibly ask for better roommates.

Sometimes I like to make up stories about the people in my portrait references. This is Imelda. She has dreams of opening her own coffee shop someday. She works as a barista at a small coffee shop and is so good at her job, she may be a week from her promotion as shift manager. Little does she know she's actually from a fairy kingdom, having been brought to our world as a baby to escape the usupers who killed her royal family. One day, the portal to her homeland opened up in front of her. She didn't know what was going on. Now, where will her story go? . . . . . #fantasy #fantasyart #fairies #portraits #portraitstudies #drawingart #drawingsketch #sketchbook #sketchy #artist #art #artstudent #artstagram #artistsofinstagram #artistsoninstagram #pencilart #pencildrawing #traditionalart #portraitart. #portraitsketch
Good morning! Dunno what else to say. Trying to see how well those weeks studying the Loomis Meeting and features paid off. . . I'm also thinking about taking up photography to make my own references photos. Anybody here photographers? What's your advice to someone just starting out? . . . #portraits #portraitstudies #artstagram #artistsoninstagram #aristsofinstagram #sketchy #sketchbook #drawing #drawingart #drawingsketch #pencilart #pencildrawing #art #portraitart #portraitdrawing #traditionalart
Hey everyone. I've been practicing drawing lips to the past couple days. It's really nice to just get up first thing in the morning and spent it learning. I've been watching Proko's videos especially for the anatomy of different parts of the face and Rapid Fire Art for the more long form hyperrealism. @stanprokopenko @rapid_fire_art . . What is your favorite thing about art? . . . #lips #lipart #lipdrawing #portraits #portrait #portraitart #portraitstudies #art #arttherapy #artstudies #realisticart #hyperrealisticart #hyperrealism #realism #sketchbook #sketchy #pencilart #pencildrawing #drawingart #drawingsketch #drawing #anatomy #anatomyart #anatomydrawing #instaart #artstagram #artstudent #artist #artistsoninstagram #artistsofinstagram
Been a few days since I posted. Drew this little Sargent study on my break at work. I think I fell into a few old habits, but what can I say? It was a long week and I was tired.
30 minute study of Rembrandt's "Old Woman Reading Book" as inspiration for a character I'm designing. . . . Working on a mini character design project. An old female "mentor" archetype. I don't have a name for her yet (I've just been calling her "female Gandalf"). She's sweet and kind, but was once a powerful sorceress in her youth- now she helps and guides the heroes reach their destiny and destroy the ultimate evil. While she is sweet, kind, and nurturing, when necessary, she becomes terrifying and is surrounded by ominous magic. . . . It will happen to many of us, but what kind of person do you want to be when you're old? Coming towards the end of your life? Will you be happy and accomplished? Sad that you didn't get to accomplish anything you wanted? Or not "accomplished" in the traditional sense, but still happy? I've been thinking about this a lot lately and I want to hear what others have to say. . . . #coffeewithart #rembrandt #oldmaster #oldmasterstudy #drawingart #drawingsketch #traditionalart #pencilart #pencildrawing #artstudies #characterdesign #fantasy #fantasyart #wizard #wizardart #sorcerer #sorcererart #instaart #artstagram #artistsofinstagram #portraits #portrait #portraitart #sketchbook #sketchy
Good morning everyone! Hope you're having a splendid Tuesday! Getting started with an eye study. . . . For the past week and a half, I've been organizing my mornings so that the first 30 minutes I spend of the day is dedicated to "learning time" (1 hour on my days off from my day job). This is where you do nothing but draw and an practice active learning to improve your art- the idea is to follow along with a book or video. . . Since I enjoy portraits the most, I've spent about 10 days drawing Loomis heads. I think I have them down, so now I'm moving on to eyes. Anatomy of the eye, etc. The past two mornings, I followed along a video by @rapid_fire_art on how to draw hyperrealistic eyes. It was fun to do. Normally, I don't share the drawings I made during this block of time, but I'm just so happy with how this turned out, and I want everyone to spend 15-30 minutes every day following along her video too. ☺️