So… I’m finally having a bit of an “off” day. Tuesdays are insane for me, so today was pretty much just me catching up on laundry and vegging out. I was going to go out and do some painting, but I’ve finally accepted the fact that that’s just not happening.

So, here are some highlights for how this week has been:

And started a painting of him…

And here’s the backside! 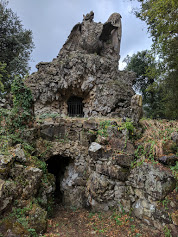 Dunno why it’s showing up as small, but here you go…

And then I went to the Duomo, and painted the side door you go into if you’re going to church:

It’s not done yet.

I also went to church at the Duomo. I apologize, I don’t have any pictures of the inside, but the experience there was amazing. I went to the 10:30 Gregorian chant mass. I waited outside for a while, there were some tour groups that congregated on the front and a few passerbys that said “The Duomo is closed on Sundays for some reason.” Since I had some time, I walked to the other side of the Duomo, and there I found a line of people going in for mass. The doors were guarded by some some nice gentlemen in dark suits turning anyone away who didn’t know the password.

When I went up to the doorway, a bearded man with a stern look blocked me. I gestered at my outfit, thinking it would be enough to let him know I wasn’t just trying to tour the place, but he still stood there just staring at me.

His stern look vanished then replaced with a warm, welcoming smile, then he stood to the side and let me through. I wonder how many people get confused by that. I can’t say I blame them though. As many centuries as the Duomo stood, I can hardly believe it’s still used for its original purpose (and no, it’s original purpose was not to tell future generations how great the Medicis were, although to be fair, it’s doing a good job of that too).

The mass was in Italian, so I could only understand bits and pieces of the homily and the readings. I’m kind of debating whether or not I should keep going to the Italian mass as it could help me with my Italian, but it would be nice to understand everything that was happening. I’m used to parts of the mass being in Latin, but I wonder if it would be beneficial if, at first, to listen to the homily (sermon) in English.

This was also my first time going to a mass at an Old World church that was built for the acoustics. Whenever there was any sound made, any singing, or reading, or anything like that, there was a sound way up high in the dome that sounded as though some unearthly creature with a deep, booming voice was humming. It was almost spooky. I really enjoyed that experience. The engineers who built the church to do that were amazing.

Classes are going really well too. Today, we learned about how the painters of the Byzantine/Renaissance era made their own gesso, which gave the canvases or boards a layer of what was almost like marble, so when you were painting, it was like painting on stone. We also learned about three different types of glues: Fish, the weakest, most commonly used for paper, rabbit skin glue, used for paintings and a lot of other things as well, and Bole (cattle hoof) glue, which was the strongest, but smelled awful! This was commonly used for furniture restoration, according to my teacher.

We also learned a little bit about gold gilding, and the teacher taught us how to make two different types of molds for when there’s a missing part on a gold gilded picture frame. When the molds were done, you would put in a paste made from Balsa wood to make the fills for the losses of the frames.

I don’t have pictures because since the frame we were using is still under copyright by the Italian government, I don’t want to take my chances. I’ll be posting again soon.

If you’d like to help support me, here’s my GoFundMe:

And, if you want cool stuff and want to help me out on a monthly basis, here’s my Patreon.